Women Should not be allowed…

To buy furniture or appliances without men!

At least if you are in our family. So far we’ve had 3 mishaps.

First was my sister in law she bought a couch that was too big to fit into her her apartment.

Then was my mother in law who bought a fridge that fit width wise but not height wise.

Tristan thought it was a good idea to leave me with the task of finding a futon or a pull out couch for the basement.  Up until now the kids were sitting on an uncomfortable lawn couch. So we figure maybe they will use the basement more to watch TV or movies if they had something comfortable to sit on. Plus if it could double as a bed for when family comes from far away, Perfect!

I decided I wanted something comfortable, and something that made a decent size bed since everyone that comes to spend a night is a couple. It needs to sleep two somewhat comfortably. I had the perfect futon in mind. It had been sitting at a local clearance store for quite sometime the last few times I had gone in. Murphy’s Law, when I finally decide to go buy it… It’s no longer there.  The sales lady said they might get more in and to check in a few days. I hit a few more stores and couldn’t find anything I liked. 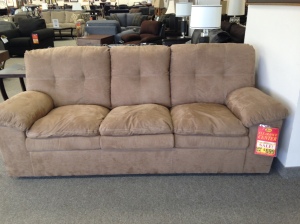 I waited a few days and decided to go back to the clearance store. They didn’t have the futon I wanted but they did have an extremely comfy pull out couch. I mean look at this picture doesn’t that look so comfy? The kids like it. I sent a picture to Tristan. His comment was “it looks big”. I said that it was but it’ll fit in the basement with maybe a little sticking out past the wall. It’s not like it matters if it sticks out a bit, eventually we are going to renovate the basement anyways and then it will have a better placement down there.

So I happily paid and went on my merry way. Until last Tuesday when it got delivered. When the truck pulled up and I looked at the path down to the basement I had an “Oh Crap” moment.  I knew it would fit in it’s final resting place I just didn’t think about the trip to get there.  Sure enough the moving guys came in. The first one said “We might be able to get it down there. The Second guy said “It’s not going to fit through the basement door and into the hallway, we will try… But it’s not going to fit.”

Of course this is when Tristan calls and I let him know what was going on and that the couch might not fit  through the  basement door then he told me he has said he thought it was a big couch. I let him go and I go an “I told you so” text.  The guys tried to get the couch down. They really did… I think they could have tried a bit harder.. but meh, it’s not my job so…

For now my couch is in my dinning room, in front of the stairs that lead to the entry way, and blocking part of my kitchen.  And I’ve learned a valuable lesson, no more furniture buying with out my husband in toe! This way if it happens again I can blame him!  So for now I hold the faith that he will be able to fix my screw up and come up with a way to get the couch into the basement still.

Ah, the life of a part-time wife waiting on her part-time husband to come home and save the day!

This entry was posted in Uncategorized. Bookmark the permalink.